We learn in these hours of a cyber attack that hit the Municipality of Palermo. All systems have been taken offline.

The Municipality of Palermo is undergoing, from about 6 in the morning of June 2nda cyber attack that hit the computer systems within the network hosting the institutional site, the management of the municipal police operations center and the video surveillance management system.

At the moment there have been no claims, but it should not be a DDoS attack (and this, therefore, would also exclude that the pro-Russians of the cyber gang KillNet): much more likely it is ransomware.

UPDATE 10 JUNE: The Sispi website that is managing the IT crisis in the Municipality of Palermo is currently offline

Phrases destined to become #CyberCult: “Certainly what has been done by #SISPI (@ComunePalermo) is something different than all accidents #ransomware that we have seen in Italy, as it provided a general picture of the situation “.
Only the frame is missing from the painting. pic.twitter.com/rPZDfLiZUn

Read also: FLASH: The University of Pisa hit by the BlackCat Ransomware

UPDATE 10 JUNE: The municipality of Palermo through twitter releases a press release explaining what happened. All services not available except demographic ones.

With reference to the serious hacker attack of recent days on the technological infrastructures of the Municipality of Palermo, a series of activities were put in place to contain the ransomware attack. pic.twitter.com/tjHVEYdNYz

The manager announces that “compliance with the contributory and tax obligations, the execution of the administration payments and the wages to the municipal authorities, to Coime, to Lsu cannot be guaranteed”. The administration: “The system for issuing electoral cards has been reactivated”.

UPDATE JUNE 9: Online the claim of the attack by the Vice-Society Group, which for 3 days after publishing the files online. 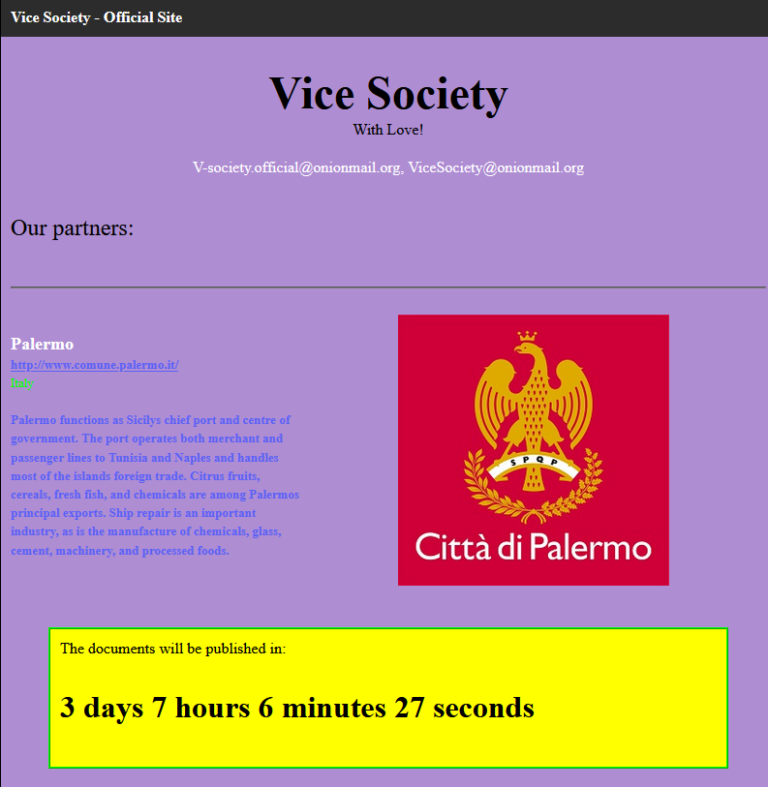 UPDATE 9 JUNE: Six days after the hacker attack, however, the feeling that seeps into the municipal offices is that of a more serious context than can be expected. According to what emerges, the institutional emails of the Municipality do not work. The common protocol of the institution does not work and each office uses an emergency incoming and outgoing mail registration system. The data related to the activity of the municipal police and the tax office would be most affected. In the case of municipal police fines, the data should be easily recoverable. For the taxes recovered the data it will be necessary to cross all payments.

UPDATE JUNE 6: The internal network and institutional website are offline. It seems to be communicated only by fax. The attack hit the municipal police systems, cameras and ZTL of the Sicilian city.

Paolo Petralia Camassacouncilor for innovation of the affected municipality, writes on his social profile that “at the moment the system has been cautiously shut down and isolated from the network”, defining the situation as “serious” and inefficiencies could last for days.

How fast can hackers encrypt your data? This is the time you can lose data on your computer!